Downloading Media and fooling around

It all started with 1 Raspberry Pi model B as an alternative to a server in the basement. There is no room in the basement for an server, and I don't like running fans/HDD's in my bedroom (because of the noise and heat). So I bought myself an Rpi B and an USB hub waited for it. 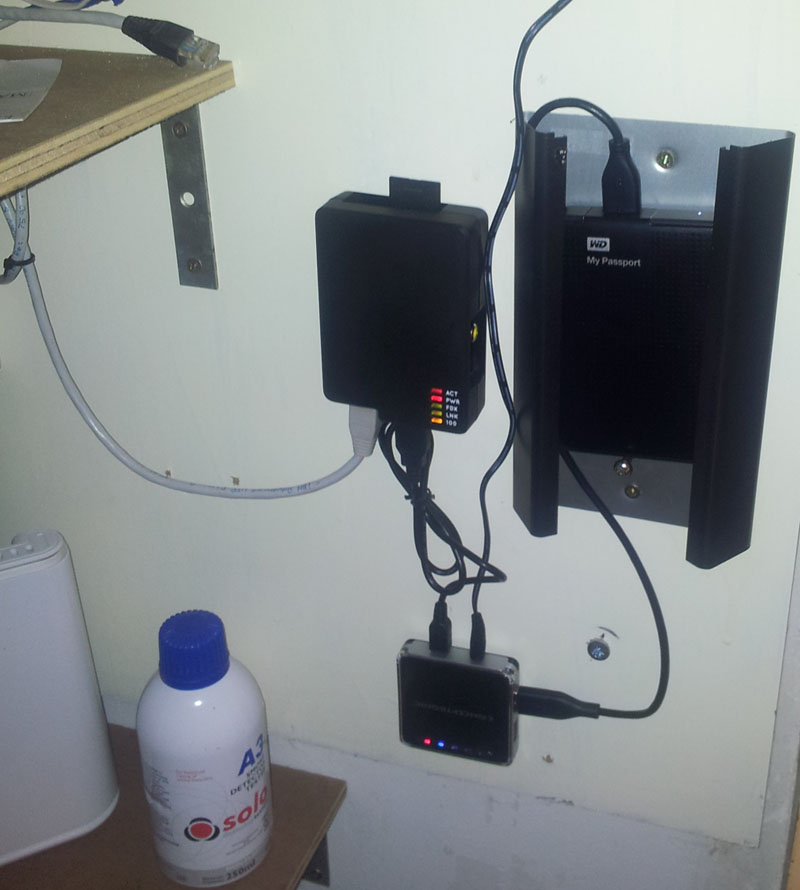 I re-used an old harddrive casing as mounting place for the portable HDD and connected them up. I used the Rpi to host some files, learn some Linux. It was not really fast but did it's job well. Not much later I hooked up a second Rpi just to fool around with. Since my previous desktop experience with Linux was that everything will break within 3 months I decided to not doom my first Raspberry Pi.

The Experiabox (router) that was provided with KPN did not really had great range, so I created a Raspberry Pi WiFi! I needed a cheap guest network with better range. I drilled some screws in the side of this table and mounted the Raspberry Pi (B again) to the table with and USB wifi adapter. Plugged the USB cable into an USB 3.0 port of the computer close to it, which remained powered even when the computer is off!

The best part is not the amount of money it costs, but the fact that I can totally control the WiFi hotspot. I can regulate up/down speed for guests, blockout any local connections to other devices in my (wired) network, with normal IPtables configuration! 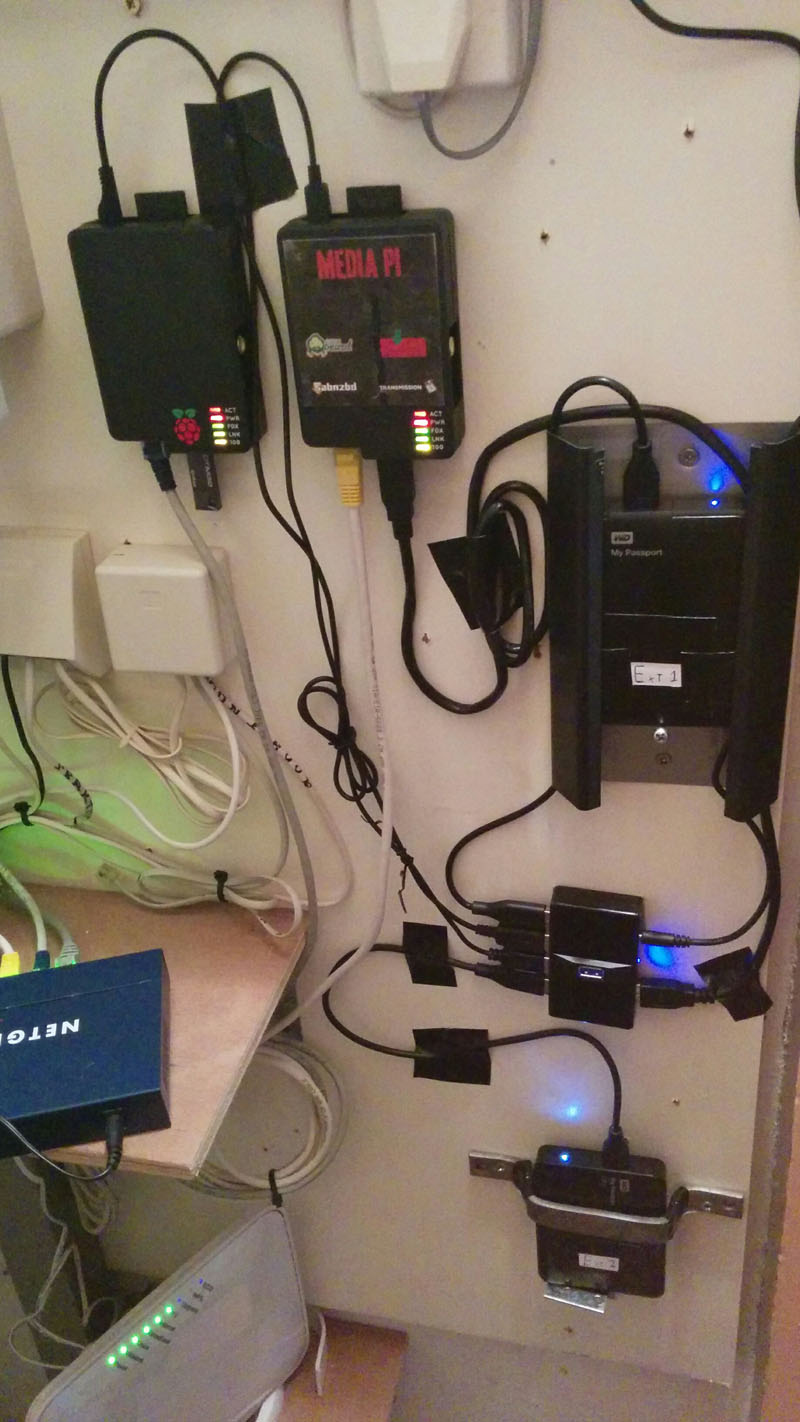 So my first 2TB harddisk was full (mostly media), so I bought another one, adding up to 4TB in total. You can also see in the picture above that I switched to another USB Hub. The older HUB allowed me to boot 2x Rpi and 2x HDD but they became zombies once all devices where under full stress.

I also started using the second Raspberry Pi as an mail proxy for KPN. KPN mail still uses unencrypted POP3 and SMTP, something that worried me a lot. There also was the problem that the mailboxes could not hold a lot of mails, only like 50MB, which ment if big files were sent you could miss out on other mails. It acted as an IMAP server and both an Mail backup. 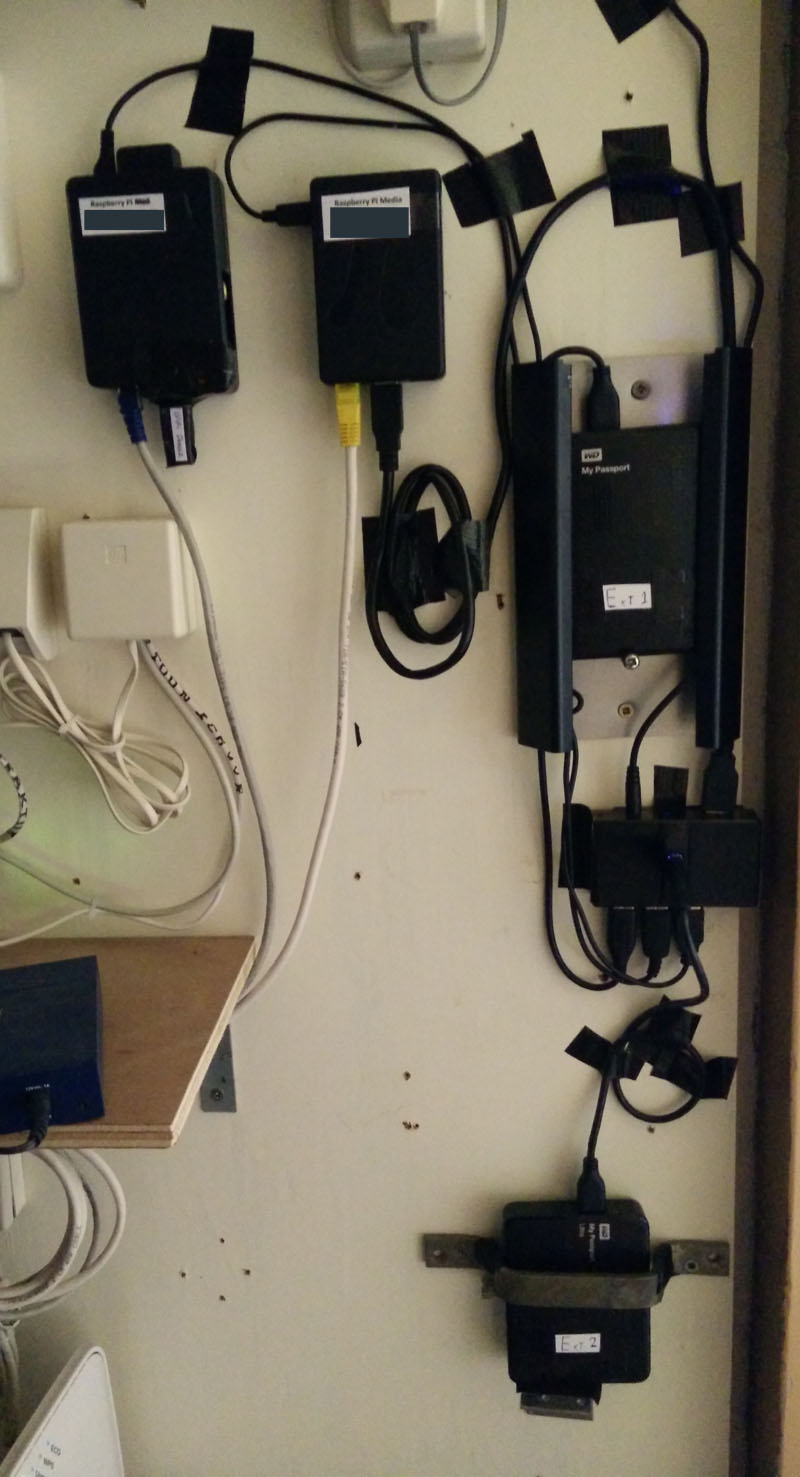 A couple of things have changed, first; the Raspberry Pi for media processing (on the right) has been upgraded to an Raspberry Pi 2B (quadcore CPU). The "Media" Rpi is now a lot faster with processing, but also with Samba read/writes (10MB/s both read and write to/from the HDD).

The other Raspberry Pi is now an backup system, for personal files, mail etc. I'm using duplicity which is an great backup tool (contains versioning, full and incremental backups from local and remote systems). The biggest advantage is that my backups are encrypted and the key is not stored on the Backup Pi. If someone steals the Raspberry Pi, they didn't gained any valuable information! Check out Duplicity.

I also created my own Music indexer and downloader (which I just updated to an dedicated Java application). I crawl various websites for new mixes by DJ's and TOP40 music from NL. These songs will be automatically downloaded and post processed. This means the adding of MP3 tags for things like artist, comments, album art etc. (especially russian DJs tend to forget these tags) organizing my music even more. These music items will be downloaded automatically and synced with my home computer via Syncthing (opensource alternative to Btsync).

With the automation of music indexing, downloading and postprocessing I basically gets an folder on my desktop with the latest music (in .mp3 format), fully ordered with all the correct metadata.

There are currently 4 Raspberry Pi's running and one off (for testing purposes). These little computers are very handy for "amateurs" to learn Linux, play around with hardware and for automation in their home.

However, there are some compromises. The ethernet ports are only 100Mbit and the usage of an SD card can make them slow and unreliable. Several times I encountered a corrupt file because the SD card could not properly write to the correct section. Another common problem is the powersupply and USB cable. Some cables from China did not work for me, and some USB adapters do not supply enough amperage. Make sure you keep backing up your SD card because corruption can happen.

On the other hand, they cost nothing compared to a real server. That's why I have 5 lying around now.... :D