In februari I posted some information about my Raspberry Pi as an Media Service (downloading and streaming). This setup is visible in the following image: 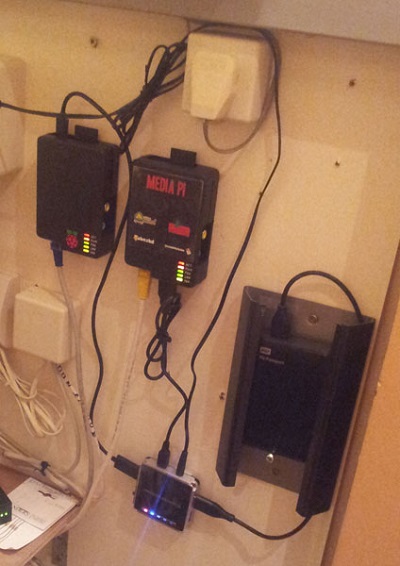 An Conceptric USB 2.0 HUB was powering the external HDD and two Raspberry Pi's. The RPi on the left was only used for a Dashboard and as a mailserver meanwhile the RPi on the right was used for downloading and streaming media. The HUB powered both the two Raspberry Pi's and the External HDD. It was not recommened to power the RPi from an USB data port but i had no choice since the HUB gave it power.

The HUB supplied a max of 2A (this is always noted on the wall-adapter), which was just enough to power 2x Rpi-B (up to 900mA a piece) and an external HDD (up to 500mA, Western Digital: My Passport). This sums up to about 2,3A when all devices are running at max, but this rarely happened. When it did the RPi became mindless zombies and needed a restart.

This setup was running fine, even the SD cards didn't fail because of too many write cycles. I'm using 32GB Sandisk cards which seems to be pretty reliable.

About a month ago my HDD started to reach it capacity. I needed more capacity which ment more harddrives. I'm now running the following setup: 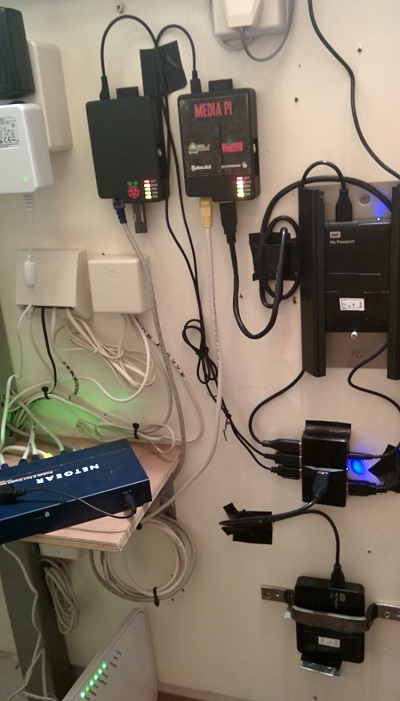 As you might notice there is another USB Hub! The old HUB was not providing enough power to run both 2 Rpi's and 2 hardrives. I switched from the Conceptric (with a max of 2A) to the Raidsonic Icy Box (with a max of 3,5A). This HUB does not power the data input, thats why you can see an seperate power cable for the Media Pi.

When choosing an HUB for power purposes only looking at which USB version and how many ports there are is not enough. The most important is actually the wall-adapter that is provided. The wall-adapter is the crucial part which will give the Amperage to all the devices. When you have an USB hub with 6 USB 2.0 ports it does not mean the HUB can power all 6 ports with 500mA (USB 2.0 guildeine). Hooking up an RPi to the HUB means that 700-900mA is gone from the HUB.

This leaves still 700mA left for additonal hardware. If you are ever willing to expand your RPi with multiple HDD's I highgly reccomend the Raidsonic Icy Box, it's the most powerfull hub i've ever seen.

If I'm ever getting to a point where I need more than 3 harddisks I will power the RPi's seperately and in that case you can hook up to 7 Harddisks!